Critics hail an excellent sci-fi trilogy. A beautiful epic to save the human race. Readers travel through galaxies, but also through history and religions. Each volume presents characters with whom the reader identifies.

Besançon, France – April 19, 2022 – Every year, thousands of books are published in the science fiction genre. Some become bestsellers while others may fade into obscurity. Sébastien Acacia’s Planet Nine trilogy is set to become one of the most famous sci-fi trilogies in decades.

The author turned out to be a master of words, as readers proclaim that they felt in a room with the author while reading his book. Readers engage with the story and its characters. They say it’s almost impossible to put the book down once they start reading.

It’s no surprise that the general public needs an effective way to escape the harsh realities of today’s world. Reading is a great way to rise above what is portrayed in the daily news. The Planet Nine trilogy will not disappoint sci-fi fans. Get ready to take a journey beyond time and space!

Reader testimonials always shed light on the story. Take a look at what Raphael Noel, a verified Amazon reader, has to say, “Masterful, Brilliant… I put 5 stars and that’s the minimum I could do, because it deserves so much more. One write up fluid, a breathtaking story that transports you from beginning to end without you even realizing it! Endearing characters, twists and turns, and what about this creativity! In short, I don’t want to say more, that’s to you to let yourself be transported in this bewitching trilogy.

The author wanted to present his Sci-Fi trilogy by giving away volume 1 for free. Volume 2 is available on Amazon, Barnes & Noble, Apple Book and Kobo. Volume 3 should be released on July 31, 2022.

Sébastien Acacia graduated in fine arts from the Higher Institute of Fine Arts in Besançon and in cultural anthropology from the Pontifical Catholic University of Rio de Janeiro in Brazil, he is passionate about science, astrophysics and history. ancient civilizations and religions. .​

A science fiction reader from an early age, he is an unconditional fan of Isaac Asimov, but also of Orson Welles, or Kim Stanley Robinson, whose Martian Trilogy definitely encourages him on his way to writing.

When his 2 and a half year old son is suffering from an orphan disease, he decides to devote his time to it, and to make his old dream of writing science fiction novels a reality. He thus leaves behind him 20 years of entrepreneurship in Switzerland, France and Brazil, and devotes himself fully to writing. He is currently Collection Director of the French publishing house Faralonn Editions.

Sébastien Acacia has been very active in the literary world. His credits include: 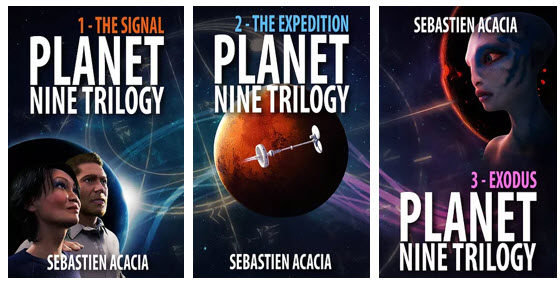