ELEX II follows the continuing adventures of Jax as he strives to unite the disparate factions of humanity to confront another alien threat. The game opens with Jax returning home just before it is destroyed by the alien incursion. Despite the threats of another invasion looming in the sky, the people of Magalan have grown complacent since the last invasion. Jax must now convince the various factions that the coming alien invasion is more important than their territorial disputes, while battling an infection that threatens to turn him into an alien creature himself.

ELEX II can be slightly frustrating at first, especially if this is your first experience with ELEX or Piranha Bytes games. The mission window does not specify the level required for each mission, and during the early stages of the game, a rat masa sneeze can kill you. The key is not to get too excited about dying a dozen times. If a mission kicks your butt, do something else and come back once you have a few more levels under your belt. Combat becomes much easier once you join a faction, but it will take a lot of legwork. I spent the majority of the first chapter going back and forth between key members of the Berserker community.

Each mission seemed simple at first, but ended up being a seemingly endless string of fetch quests or messenger runs. Your money, and therefore your ammo, is very limited for the first 15 or so levels. As a result, you can try sticking to your melee weapons, but beware. Several enemies can hit you two or three times in a few seconds, which can still kill you even after getting the faction armor and skill boost if you’re not careful. It wasn’t until level 17 that I started pocketing a comfortable amount of shards and ammo. It will also take you several levels until you can start spending your learning points on learning new skills. Due to the initial difficult curve, it is essential to always keep a companion with you when starting out. They’ll be able to deal more damage than you, and they’ll also serve as a handy meat shield or cat toy to distract monsters. 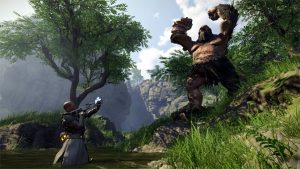 Gameplay is generally enjoyable. The quick inventory system allows you to quickly change weapons or use potions or food to heal yourself. The combat is slightly clicky but isn’t too awkward. There are several bugs that lowered the gameplay score for me. The game is not fully optimized, which sometimes results in a dramatic frame rate drop during battles. I had issues with the aiming system when surrounded by multiple enemies. Once I was trying to finish off an enemy on the ground, but every time I aimed my gun, the AI ​​aimed at the flying enemy instead.

The AI ​​is also glitchy at times with your companion. I will frequently circle around trying to avoid a raptor and my companion is standing right in the middle admiring the scenery. Once my mate froze completely and I had to fast travel to another location to bring him back to reality. 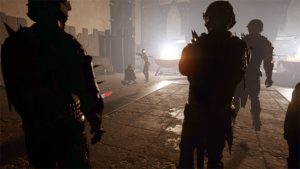 Graphics and sound are pretty good. I had minimal issues with textures falling off. Audio keeps you on your toes. Even when there’s no enemy in sight, I swear I hear grass rustling or footsteps. The main complaint I have with the graphics is mouth movements during dialogue. I have to force myself to read the subtitles, because looking at the mouths of the characters while they speak makes me uncomfortable. You can see far into the back of their mouths, and their teeth sometimes look jagged. 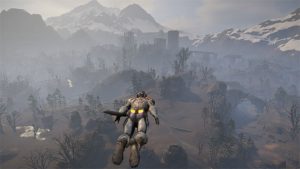 Despite all my complaints, I love playing ELEX II. Every weekend since I got the game, I’ve had to step away from it to force myself to get some sleep. I think I easily played for over 30 hours right after it launched. One of the reasons for this is the interesting side characters and companions you can meet and adventure with in the world. After you’ve earned your companion enough loyalty, they’ll add fun conversation pieces as you explore and even interrupt your conversations with other mission characters. Fox is my favorite right now. He deals good damage in combat, has a great personality, and delivers playful hits to Jax. 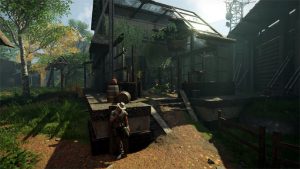 The world is vast with lots to explore like abandoned houses and factory buildings filled with salable items and glimpses of former occupants. A few houses have chilling notes about the disappearance of former residents. In a house, I found a note from the kid who lived there about a monster baby they wanted to keep as a pet. It’s not explicitly stated, but I guess the monster is the same one you face when entering the house, meaning it probably ate the child and its parents. One house contained a skeleton in the tub holding a toaster. Another contained three audio logs about his search for a cure for the infection. I won’t spoil the exact details, but this is the darkest I’ve found so far. 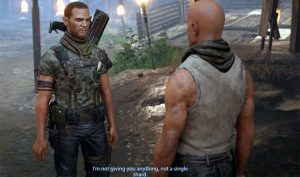 At $59.99, ELEX II is good value for money. There are several factions to choose from and you can create your character to be creative or destructive. Choosing different factions unlocks different side missions. All this allows for good replayability.

Overall, ELEX II scores an overall score of 4 out of 5 GiN Gems. ELEX II is a game I can easily see myself putting 100 hours or more into. The dialogue is sarcastic and funny, the characters are interesting, and the world is fun to explore. I was very quickly attracted and I no longer want to do without it.